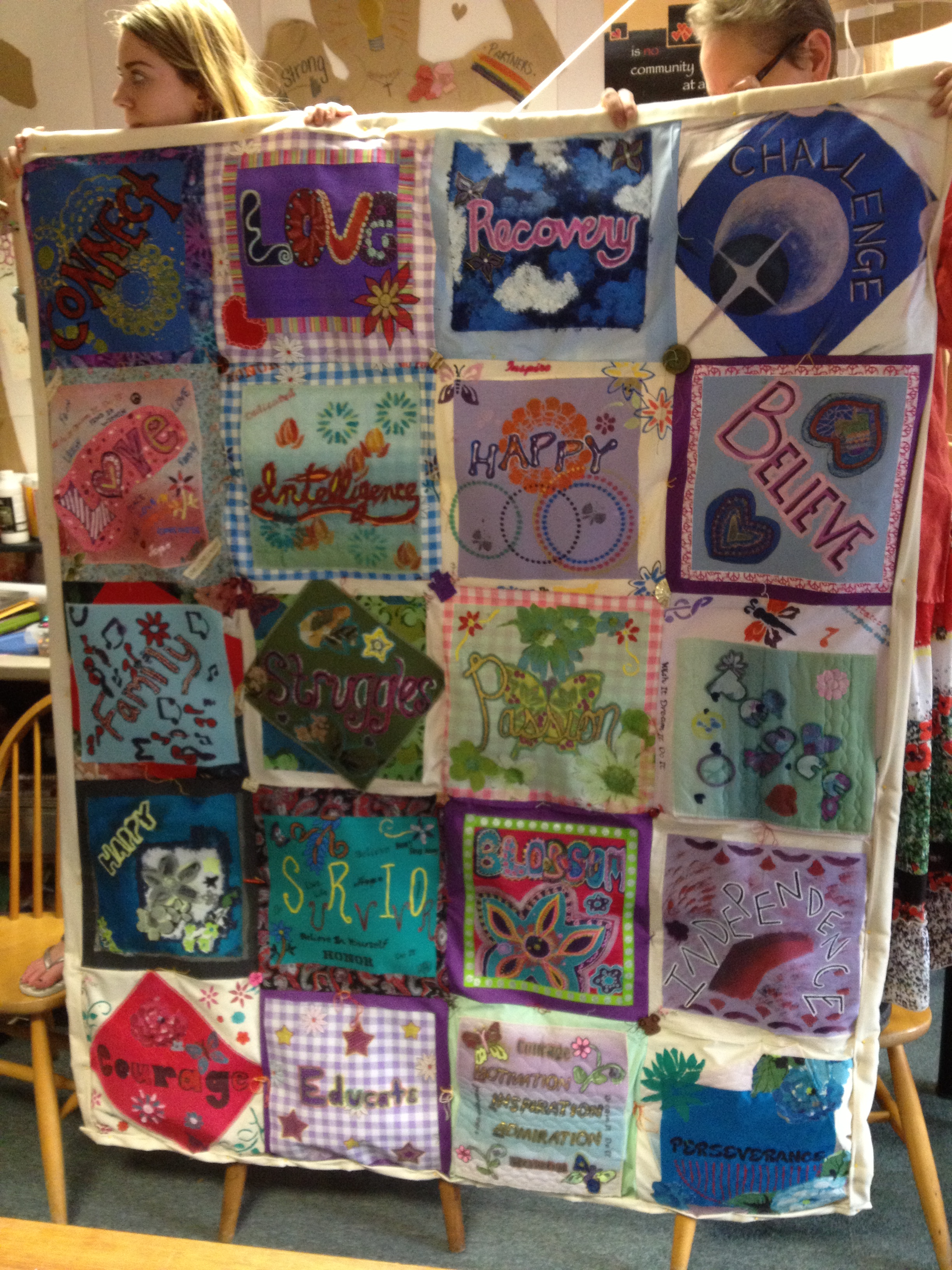 We sat at the writing table. Ten women from the local corrections work release unit, eight Lafayette College student volunteers, and me. The assignment was to write a life story about a time that we felt empowered. A life story is a short reflection of a specific time or event in our life. The stories ranged in length from a few paragraphs to three pages. At the time The Journey Home, an expressive arts therapeutic program for women, was located in a storefront on North Second Street in the historic downtown of Easton, Pennsylvania. Established in 2009, the Journey Home was housed in a storefront consisting of a circle of rocking chairs, a writing room and an expressive arts studio. The women from the local work release program would first gather in the circle of rocking chairs for an opening ritual to our evening’s activities. After a check-in we would move either to the writing room or to the arts studio depending of course on the activity. This particular night we moved to the writing room. The writing room consisted of a large library table recycled from the storage room at Lafayette College. The walls were adorned with artwork the women had made in the art studio. A small Bluetooth speaker provided calming music while the women reflected on their lives. At one end of the room was a counter, which held the all-important Keurig machine, a microwave, and an assortment of snacks. The hot chocolate was always a winner as the women selected from the containers filled with an assortment of coffees and teas. On this particular night, the writing was a part of the process to create a women’s empowerment quilt. A process that integrated several components of my trauma informed practice in expressive arts therapy: After the writing, each woman was asked to share their writing by reading their story to the group. I then asked them to identify one word that would represent their moment of empowerment. They were then asked to create a movement that represented that word. For example, one word was “education” and for this the woman stood with her hands held as a book. For another the word was family for which the woman wrapped her arms around her self in a hug. After the movement was selected we stood in a circle. We went around the circle with each woman speaking their word and demonstrating the movement. We then choreographed a circle dance in which each woman would speak her word while simultaneously performing her movement. After which, the rest of the women as a group would reflect back the word and movement similar to a call and response. You can see the words reflected in each square of the quilt in the above photo. At the end of this session we returned to the rocking chairs for the closing ritual for the evening group. The next evening we again met in the rocking chairs to begin our session and then moved to the arts studio to create the quilt. I recently received a donation of fabric squares in a variety of patterns. Each woman chose a fabric that represented her word and began to design her quilt square. The designs would consist of several layers – paint, ribbon, stencils, etc. You can see in the photos the creativity and variety of techniques that were incorporated into each square. Although each woman chose her design, the process was a collaborative community arts workshop with several women working on each square. After the squares were complete, one of the volunteers brought in her portable sewing machine that we used to stitch the squares together. Rolled in the corner of the studio was a large piece of canvas. The canvas was the exact size to serve as a backing. In between our sessions, I made a trip to the local fabric store and purchased the filling and other supplies we needed. Our final step was to quilt the squares. We decided to use a technique in which we tied the corners of each square. I had recently received a donation of over one hundred assorted buttons. I had never seen such a variety of buttons from sports items, flowers, animals and others. Each woman selected a button that symbolized their empowerment word and we used the buttons to tie the quilt. Then the final step was for each woman to sign the frame that was created by folding over the backing. The Women’s Empowerment Quilt has been displayed in many places. In the photo above it is on stage at Lafayette College during a guest presentation by Piper Chapman the author of Orange is the New Black. The women who made the quilt met with Piper and they shared their stories. One women, Crystal was chosen to introduce Piper to the Lafayette audience. It was indeed a time of empowerment. For a short time it hung on the wall at the local correctional facility and it is usually at home on the wall of my studio. In mid-April it will be displayed again at Lafayette College as the background for a presentation of the life stories written by the women who are presently incarcerated in the Northampton County Corrections. Offers have been given to purchase, as well as suggestions to use as a fund-raising auction. Alas, my connections to each square, to each work, to each ribbon and splash of color, to each woman whose name is written on the edge, is to deep in my heart and soul to part with this amazing symbol of the empowerment the women feel when part of The Journey Home program.

Knocking on the Devil’s Door

Centering our Minds and Thoughts

There is a Buddhist Koan about a person who is walking along in the mountains and falls down a cliff. She grabs a hold of some tree roots and holds on in fear of death. I told this story to the women in a group I facilitate in the local county jail.  The story ends with the person seeing a delicious strawberry and letting go of the roots to eat the strawberry.

This story was about my difficult decision. As I explained to the women in my group, the tree roots represented my professional life at the time. It seemed that I was clinging to it and afraid to let go. The strawberry was, is the women, the work in the jail.

I chose the women and retired from my professional academic career. The women were thrilled especially to know that they are my strawberry. I wonder how many of them have truly been the strawberry in someone’s life?

A colleague listened intently to my story and suggested that the group is now “Bonnie’s Strawberry Patch.”